No one expected for this to have happened, especially not on a normal- well not normal at all anymore I guess- Wednesday. Who knew human skin and flesh when melted turned into a slush-like consistency, capable of melting other humans and living animals and turning them into slushy-flesh monsters? Yeah, this was the apocalypse, something straight out of a lovecraftian horror, or Stephen King’s stories, except it was something the world lived with for millenia, the Sun. As of 6am PST, daybreak, or as us survivors call zero hour, anyone who had direct contact with the sun turned into these things, the billions of people who never had a chance at survival, turned into what are now classified as mounds, with levels of intensity. Us survivors keep a catalog of these things, what alarms them, what they can do, all of it in mental records, as written ones wouldn’t be seen by anyone who was “alive” anymore. Many people who lived on other sides of the world, those who hadn’t seen daybreak, were warned of these near instantly, but even though this had just started, half the population was gone already. These Things,  the mounds, they’re pure 100% flesh, nothing else, nothing more. They omit these sounds, no one other than specific targets can even hear, they sound like people they loved, people they held dear, but these people, if you can even call them that, aren't people. They lure them with the cries and promises from loved ones, the cry of safety and how they aren't in danger, but I guess after the apocalypse people would do anything for another glimpse of their family. The mounds lure people from the shadows, convince them to remove their protective clothing like hoodies and gloves from the sun, to turn them into mounds, to increase. We categorize these mounds from how many people they’ve consumed. We can normally estimate based on the size of them, or by how many faces we can see in their flesh.

I know this sounds bad, but after you get over the constant feeling of something possibly being behind you, the near no rest you get after being paranoid for hours on end, the exhaustion of running every day, yeah it's bad. It couldn’t be anything else. I probably should’ve mentioned this sooner, but the way we survivors have been, well surviving, has been us stacking clothes like hoodies, ski masks, shades, anything possible until we can guarantee that every surface of our skin gets covered. Small parts of our bodies being shone on won’t turn us per sey, but there is no guarantee that part of your body will remain connected. I hear people have been trying to create a cure, a cure to whatever this is, but how is it possible to convert basically liquid flesh back to solid, with human intelligence and autonomy remaining intact? Even if they don't regain those, it just isn't possible as their organs and bones are gone, melted along with the flesh of these monsters. Us survivors run around, searching for convenience stores or empty bunkers full of food. I like to think there are at least 100 million survivors, and while that seems like way too many people, considering just 20 days ago there were nearly 8 billion people on earth, 100 million doesn’t seem all that farfetched. That does mean that seeing another survivor is a rare occurrence, and typically when seeing others that’s when you find a camp or construct which people have civilized, or a group worshiping these things. I’ve seen people sacrifice themselves to join these things, and it’s just traumatic. They way how even at night, where direct sunlight is no more and reflected sunlight from the moon doesn’t affect us somehow, the danger of these monsters attacking us while we rest and melting us into them just makes sleeping a hazard, no matter how necessary it is. Now, I'm getting tired. I haven't slept in around 2 days, I’ll clock out right now. Besides, I can hear my mother calling out to me, being mad I haven’t slept for so long…

In the Flesh, Not the Soul
Kimberly Rodriguez

There was someone already in the elevator when I got on. "And which floor are you heading to?", he asked me."1st", I replied. He pushed the button and we began our way up. He was a nice man, in a dull gray jumpsuit, and a nametag which said "John". Clearly, he was a janitor here at the hospital, and we made small talk about random things in our life. My night shift being over, it was nice to talk to someone and relax for a bit. He got off on the 5th floor, wished me a good day, and headed down the hallway to the left. When the elevator finally got to the 1stfloor, I got off and was headed toward the exit when the security guard stopped me. "Who were you talking to in the elevator?" he asked me, with a puzzled look on his face. "What do you mean who? I was talking to one of the janitors at the hospital, John. "The security guard motioned for me to come and look at the footage from the cameras inside the elevator. In the footage, I saw myself talking to no one. "That janitor, John, you said? He has been dead for nearly 5 years now. I saw him once too but thought I was just imagining things, it being late and all. But now, you've proven me wrong." I was shocked. After that foggy night, I never took another late shift again-with fear that whoever I would begin to talk with was never even there in the first place.
Based on true events.

Megan Smith
The wind whistled through the still grounds of the autumn faire. She was the only one there, her only company a crowing raven perched high in the branches of a cypress tree, bare in the wake of fall. Julia shivered as she made her way through the cracked straw beneath her feet, the dim green tractor, paint flaking, abandoned years ago. Webs coated its surface, dotted with dew. She ducked through the trailing fog and into the cold walls of what used to be a corn maze, now a dry, rustling, overgrown mass of husks. Her friend was in there.
Over the years, she had carved out a path. Her footsteps were worn into the ground, husks bent aside, debris and soil packed down beneath her trembling footfalls, a winding road to a single worn rock, painstakingly etched with Abby’s name. Julia closed her eyes, picturing the times when she and Abby would run here, shrill laughter ringing, darting forms beneath the legs of maze-goers. This was their favorite place, a children’s palace away from the watchful eye of parents, a place of play and war. Even when they were teens, even after this place closed down— they still went, it was tradition. That’s why, even when Abby’s parents had arranged her burial in a fancy, green-lotted graveyard, Julia had claimed a place for her here. She reached the center of the maze, a small square of dirt she had cleared of deteriorating decorations that were still piled in the corner. She didn’t care; Abby wouldn’t have wanted them gone anyway.
“Happy Halloween, Abby,” she whispered. Not to the rock, but to the air, to the maze, to the faire, to their special corner of the world. The wind blew a little harder, and Julia liked to imagine that she heard.
Welcome to Interlude Literary Magazine, a magazine written and published solely by the students at Chatsworth Charter High School.  We publish student and staff writing and art.
SUBMISSIONS ARE NOW BEING ACCEPTED FOR THIS YEAR'S MAGAZINE.
Submit to [email protected] or bring it to room G49.
Follow us on Instagram: 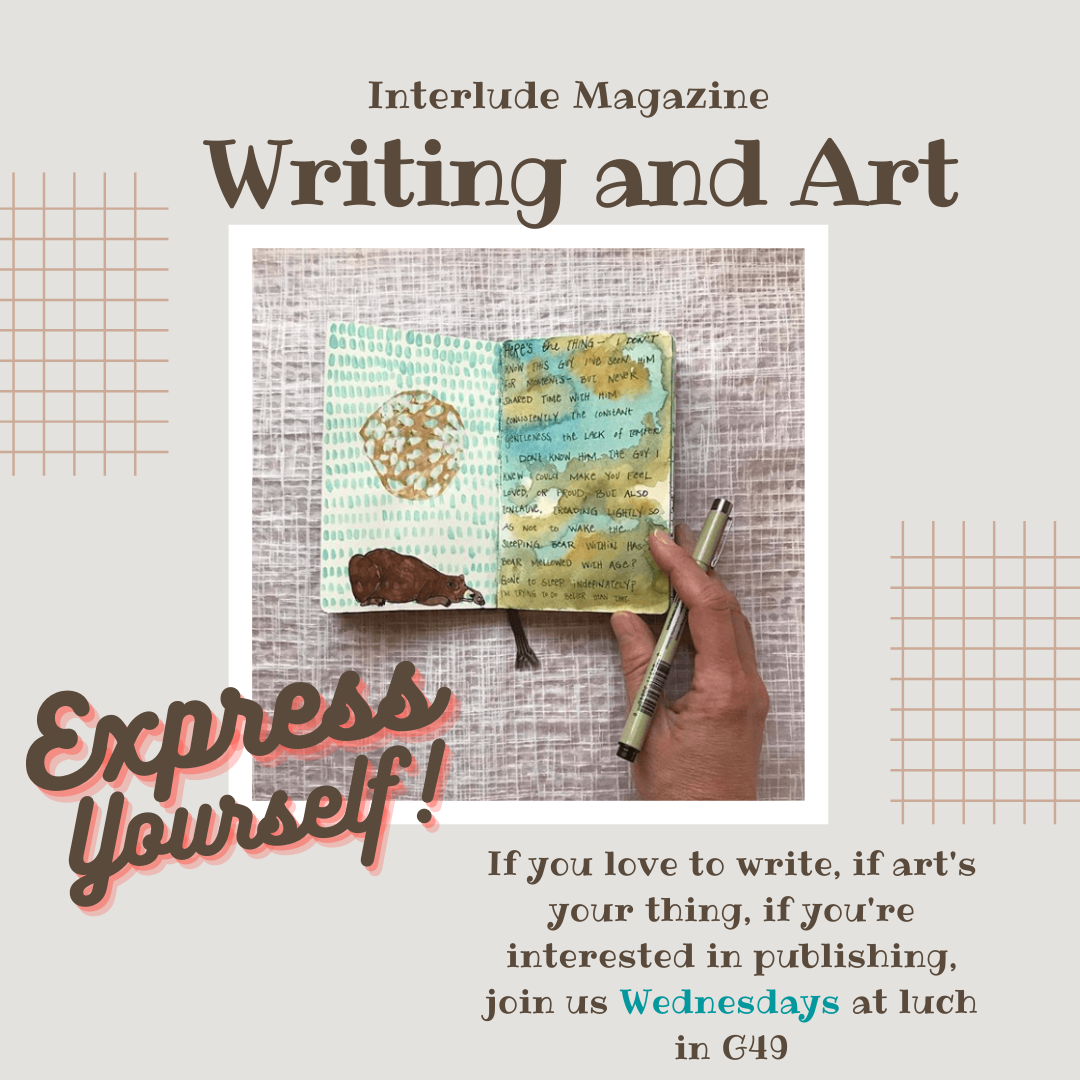 President: Ana Tovmasyan
Vice President: Kimberly Rodriguez
Head Editor:
Art Editor: Kaitlyn Torralba
Writing Editor: Jacqueline Ordonez-Castillo
Outreach Coordinator: Ana Tovmasyan
Historian: Kimberly Rodriguez
Secretary: Gift Asiimre
The New York Times wants to know, "What's it Like Being a Teenager?" This contest is open to everyone. Submit to them. Submit to us as we'd like to know too! https://www.nytimes.com/2022/10/05/learning/coming-of-age-in-2022-show-us-what-its-like-to-be-a-teenager-now.html